One of my favorite holidays has finally arrived! The day that celebrates stimulating the economy and cute shoes...on sale at that! Black Friday! While I am not down in any way for stampeding people, wearing my pajamas shopping or any of the other faux pas that come with the day after Thanksgiving, I do love the excitement! My inner Becky Bloomwood,(the lead character in Confessions of a Shopaholic), comes out to play as I see sales and coupons galore. 40% off my entire purchase...$25 back if I spend a $100..hold on I'm on my way!

Are any of you going out this morning? Will you start at midnight or get some sleep first to build up your energy? Whatever you decide...shop smart and no one gets hurt! Injuring little old ladies on the quest for a bargain is never cool! ;)
And in the spirit of the day I will close with the trailer from Confessions of a Shopaholic. For those who never seen it when it was originally released it is really a fun movie and Isla Fisher is as always a doll!

Signs that Thanksgiving is upon us: 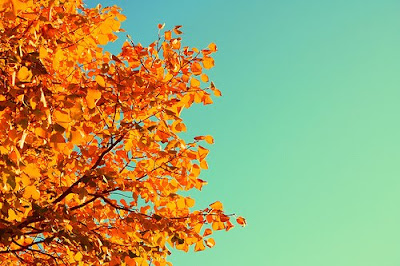 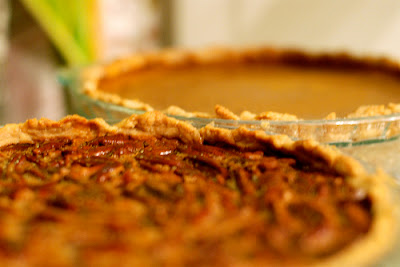 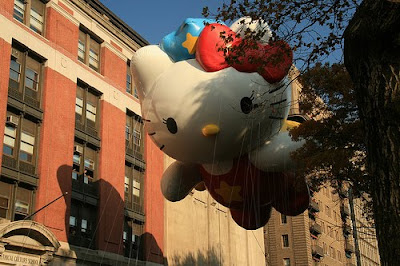 Tonight after I am full of the bird and pecan pie we are going to see one of my all time favorites...Kermit the Frog! :) I can not tell you how excited I am for the nostalgia that is The Muppets! So as I relive my youth I will leave you with a Happy Turkey Day and a frog....

On a crisp fall morning a young, okay middle aged, couple ventured down a foggy drive. Past plantation homes that left secrets to past lives, through weeping willow trees that seemed to cry out for those who are now gone...the couple dared to continue on their journey to one of America's most haunted destinations... 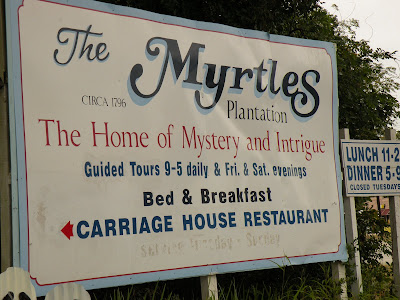 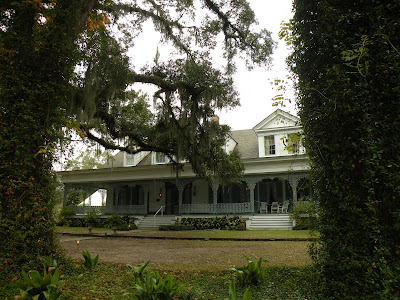 Built in 1796 the antebellum plantation is just north of Baton Rouge in St. Francisville, Louisiana. Now a bed and breakfast the mysteries of the property are things that Hollywood writers can only dream of. Our tour guide told us that guests regularly get spooked by ghostly figures, sounds of children laughing and footsteps. Many of them leave in the middle of the night and return to get their belongings after the sun is up the next day. 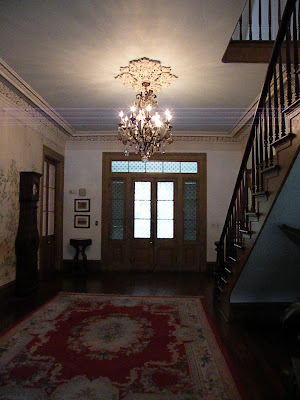 Several different stories exist about the Myrtles and like most ghost stories it is hard to differentiate fact from fiction. Tales have been told that the house sits on an Indian burial ground and that past uses of voodoo still come back to haunt guests. The most common tale is one of Chloe, a former slave who accidentally killed several of the family members. In turn she, herself, was killed and some say she still roams the property. 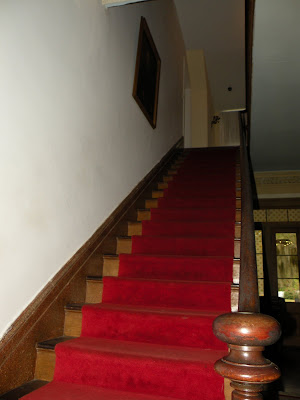 While there are no records to support the story of Chloe ever living at the plantation, one death there is certain...that of William Winter. Hired to help manage the plantation, Mr. Winter was shot in 1871 on the porch upon answering the door. After trying to climb up the stairs he died on the 17Th step. 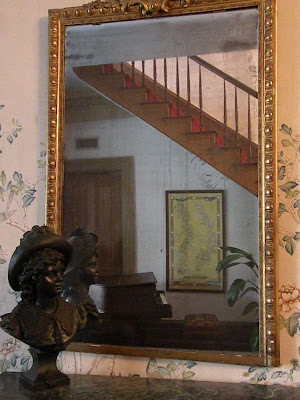 This mirror in the foyer is said to have Chloe's spirit trapped and that her face shows in the right hand side as a shadow. 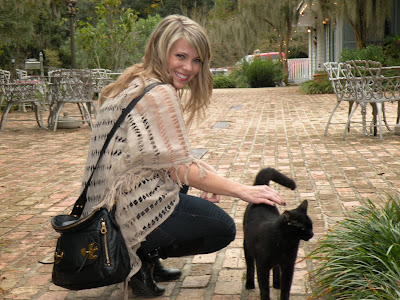 While I don't necessarily believe all of the scenarios told about the home, it does definitely feel like there is something surrounding the property. It is quite spooky! The black cats roaming about were a nice addition I thought! Giant Weeping Willows coupled with a maze of manicured shrubs gave the front yard an Alice in Wonderland feel. 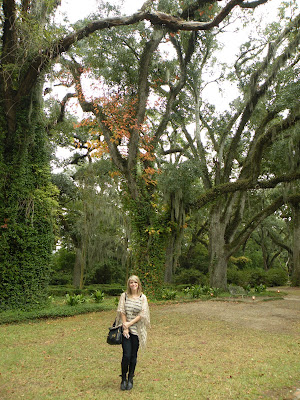 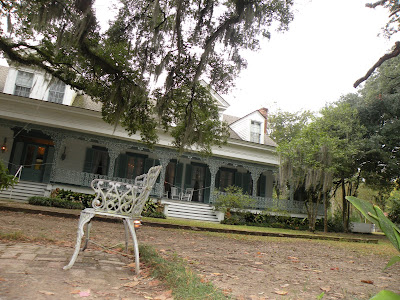 After exploring the Myrtles we headed back to I-10 on our trek to New Orleans. Our first stop after arriving in the French Quarter was Jackson Square. 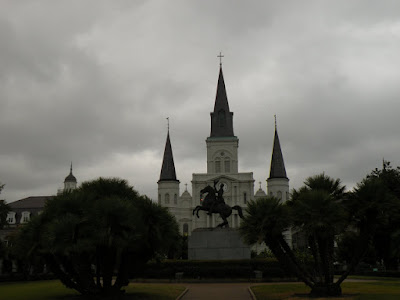 St.Louis Cathedral stands at the foreground of Jackson Square. The structure as it now stands was built in 1850, though some form of the church has been there since 1789. Staying true to my haunted Halloween weekend theme , even the cathedral is said to have paranormal activity. From a haunted bell tower, monks that still watch over long after their deaths and ghosts of those who made their final resting place in the church, the stories seem to go on endlessly. One of the most famous former New Orleans residents is also said to make random treks to St. Louis Cathedral...Marie Laveau. The former voodoo priestess began as a devout Catholic and wed Jacques Paris at the cathedral in 1819. Paris later came up missing and left Marie Laveau a widow. Perhaps she is coming back to mourn her lost love as reports have said she is seen praying. 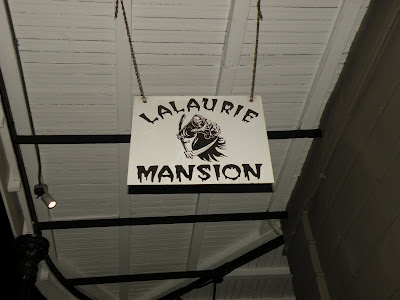 We took a ghost tour of the French Quarter, via Gray Line Tours, (side note: if you plan on taking a tour and have AAA log onto their site for a discount on all of the tours offered). The tour was interesting, but the most eerie place was the LaLaurie Mansion. Built in 1832 by Dr. Leonard Louis Nicolas LaLaurie and his wife Delphine the three story mansion sits on a corner lot at 1140 Royal Street. 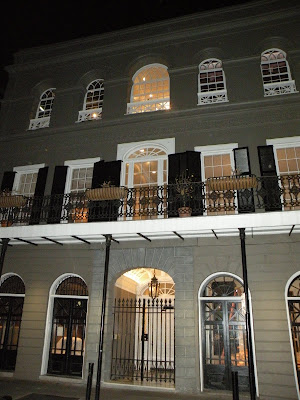 This spot has tales of unspeakable torture placed upon servants of the LaLaurie's by the home owners themselves. Practicing illegal medical acts, brutal beatings and even chasing a young girl off of the rooftop, causing her to meet her demise on the street below are but a few of the horrific stories to be spawned at this address. As in the other tales time has likely added a myriad of details that may not be grounded in truth, but most believe that the LaLaurie's cook purposely set fire to the house in 1834 to draw attention to the cruel acts and poor condition of the servants. From that point the events get sketchy, but the LaLaurie's fled the scene and are widely believed to have turned up in Paris. Since then the home has served many purposes such as an apartment building, furniture store and until recently was owned by actor Nicolas Cage. 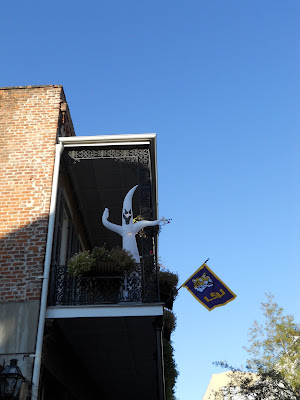 So we didn't see Chloe at the Myrtles, Marie Laveau at St. Louis Cathedral and, you guessed it, there was no sighting of Mrs. LaLaurie chasing her victims, but we did spot this ghost waving to us from a balcony. At least he is friendly...quite like Casper! ;) 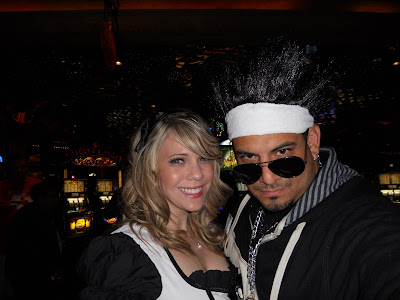 All of that ghost hunting was tiring and there is no better way for a tired tourist to relax than sitting down...in front of a slot machine! Donning our Halloween costumes, (Gabe as one of the fools from Jersey Shore, myself a French maid), we hit up Harrah's for our last bit of entertainment in the Big Easy.
Posted by Joy De Vivre Design at 8:37 PM 3 comments: