Things that I learned at Rock the Bayou 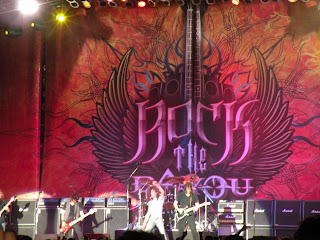 Houston had a festival this past weekend full of all of the 80's hair bands. There were many performers for four days, such as Ratt, Sammy Hagar, Bret Michaels and LA Guns.These are things that I took away from it:
1. You can still try to pass off a band as the original even if just one person is the same.
2. People who plan concert events outside in Houston in the summer are insane and those of us who attend are just as crazy.
3. There are people out there that can create a whole living room full of blankets, rugs and blow up couches outside at a rock festival. With just a little help from an air pump an entire room setting was created! Very impressive! I am going to try this next year, except for I will even include end tables and lamps,(I am a design major after all)!
4. Grown men who are aging rockers and have nothing else to do to shock people, sometimes wear dresses! Yes I am talking to you Taime Downe from Faster Pussycat! It is not cute to wear your grandma's moo moo dress to perform. It is also not cute when you wear black and red lipstick and do not apply it correctly. No self respecting drag queen would be caught dead with bad makeup. May I suggest a MAC consultation!
5. Sammy Hagar is a cool dude! Well I already knew that, because I have been a Van Halen fan for years, but he put on a great show! Ratt also did a great job and unless Stephen Pearcy cheated and had botox he really has not aged much at all.
6. There are girls out there who think that a bra can be substituted for an entire shirt. I can not figure out the thought process to get someone to go out of the house without the rest of their ensemble, but this is in fact what I witnessed. I have been in a hurry many times. I have also been extremely annoyed trying to figure out between two shirts which one to wear, but never, no never, have a decided to just give up and leave the house with neither.
7. If you give a guy a guitar, take away his hair and pack on some pounds, he can still get girls!
8. If you give a guy a tv show, pack on the makeup and give him a guitar he can get lots of hoochies, not pointing any fingers Bret Michaels.
Posted by Joy De Vivre Design at 7:56 PM