Mc Donald's Is Determined to Make Us Obese! 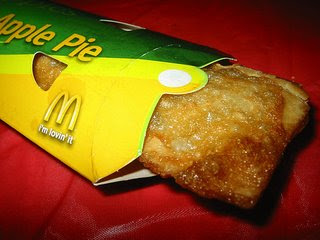 Today, as other days before it, I went to Mc Donald's for a quick bite. I was running between work and school and just wanted a little snack until I had more time to go eat lunch. I ask for one apple pie. This time, as many other times before it, the person on the other side of the menu speaker says, "Ok that will be two apple pies for $1". Then I say, "No, I just want one". Then the menu speaker girl says, "Well if you just get one it is still $1 and it is a better deal for you to get two". What is a better deal is for me to eat fewer apple pies so that I can still fit in my clothes! That my friend is a better deal!

Why can I not just get one apple pie for fifty cents? You are made to feel stupid if you just get one for a dollar, because as I have been informed MANY times it is cheaper to buy two.

I guess getting two of them and throwing one away would be just as easy, but that always makes me feel bad. Anytime I throw stuff away it reminds me of all of those homeless children in commercials who have no food. Then I start feeling guilty, because those poor kids would kill for a little apple pie. At that point after thinking about sick and hungry children I can't even enjoy the one pie that I did go there to eat!

McDonald's' please change your policy! I don't need the pressure of this whole pie thing! Oh and while your at it, please add veggie burgers to your menu! :)
Posted by Joy De Vivre Design at 8:44 PM

Hey there, you Superior Scribbler, you! Just checking in with the winners, to see what's going on at your place. Also, I'd like to tell you 2 important things. First, please don't miss my Silly Sunday Sweepstakes tomorrow...you can contribute to the legend of the Superior Scribler by helping us out! Also, I've been nominated for a pretty neat education blog award. You can vote for me, the Original Superior Scribbler, by visiting my place and clicking on the EduBlog icon. Thanks so much, and hope you visit soon!