NASHVILLE, Tenn. (AP) — A year after a firefighter found him thrown into a muddy field by the tornado that killed his mother, toddler Kyson Stowell is getting ready to celebrate his second birthday.

His incredible survival was one of the most comforting stories to emerge from the misery caused by a string of tornadoes that killed 59 people and splintered homes and businesses in five Southern states last Feb. 5.

"God just saw fit for Kyson to be in our lives," his grandmother Kay Stowell said.

The blond-haired, blue-eyed occasional mischief-maker will have cake and ice cream for his second birthday on Feb. 16, an event that's as heartwarming as it is improbable.

Rescuers found Kyson face-down and motionless in a rural field northeast of Nashville strewn with splintered lumber, couches and toys, about 100 yards away from his mother's body. But the infant was OK, needing only two days of hospital treatment for scrapes and a collapsed lung.

Now, Kyson's talking, and he likes four-wheelers and dump truck toys. He watches videos about a little brown bear and the alphabet. And, at 33 inches tall and 28 pounds, he's big enough to occasionally get himself into trouble.

"The other day he got in the refrigerator, found some eggs and dropped them on the floor," Stowell recalled with a chuckle. "He loves scrambled eggs; he wants them every day."

Stowell thinks he has little memory of the tornado, which brought winds to the area reaching 165 mph.

"One time a storm was coming and he said 'boom boom' and kind of grabbed at me," Stowell said.

But if there's a positive to be gleaned from the storm and its aftermath, Stowell wants Kyson to see it. After well-wishers filled her sunroom three times over with clothes, toys and other gifts — some from as far away as Australia — she donated some of it to others affected by the tornado.

"We want to teach Kyson to help people and stick together in tragedy," she said.

He recently received a picture of a little girl whose family had sent him some clothes months ago after word of his survival made global news.

"We tell him she's his girlfriend," said Stowell, who has no other grandchildren.

Kyson's father, who did not live with the boy, was recently laid off from his factory job in Gallatin. Stowell and her husband Doug watch the little boy during the day and every Wednesday night at their home in Trousdale County, northeast of Nashville, and take him to church on Sundays.

"He asks for his mom every now and then and we tell him she's in heaven with Jesus. It seems to ease his mind," she said.

The tornado that swept up Kyson was part of a wave of deadly storms across the South that night that killed 59 people and injured hundreds of others.

Tennessee was hardest hit with 22 counties having twisters and 200 people injured. In the months that followed, Uncle Sam doled out $26.3 million to Tennessee to help out.

In Macon County, where 14 died, some 430 homes were damaged. Today, a monument stands in the courthouse lawn in Lafayette with the names of the 14.

"I think the residents who were victims have done the best they could to put their lives back together," said County Mayor Shelvy Linville.

For the Stowells, returning to normalcy included an early birthday present for Kyson two weeks ago when they went to the circus in Nashville.

"He got excited when the motorcycles came out," Stowell said. "They reminded him of his four-wheelers."

That he's here to enjoy it still amazes Stowell: "I look at the baby and thank God he's here. It makes me want to hug him."
Hosted by Copyright © 2009 The Associated Press. All rights reserved. 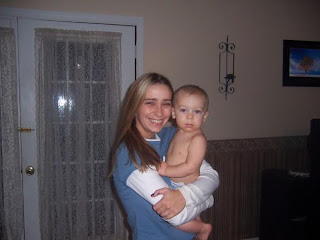 Just wanted to share this story. A year ago today my family in Tennesse had to deal with a horrific storm that took the life of my second cousin. The light at the end of that very dark tunnel was that this beautiful little boy is still here to help his mom's memory live on. Kyson, I know you will grow up and make all of us very proud!
Posted by Joy De Vivre Design at 4:31 PM

saw your blog from a link on an etsy thread.
my god. i'm so sorry.