I hope you all had a great Halloween! We had a fun day with lot of food and friends! 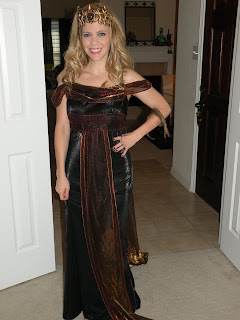 I dressed up like Medusa, which is sort of ironic since snakes are my worst fear. 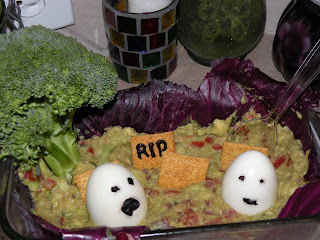 I tried to make the edible graveyard that I had posted earlier on here. It didn't come out as well as I had hoped, but it still tasted good. Turns out getting little olive eyes and mouths into an egg-not so easy! Looks and magazine photos can be deceiving. 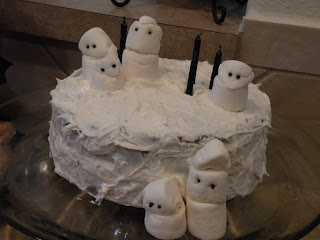 I really liked the ghost cake idea that I got from Martha Stewart. We hated to cut it! 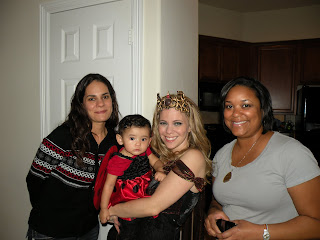 Livi, Kaylin, me and Adrienne. I didn't get a picture of Kaylin's mom and dad, but they were dressed up really cute. Our little ladybug was celebrating her first Halloween! 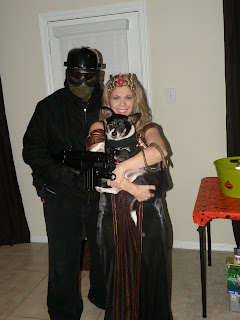 Gabe looks like he is taking Barkley and I hostage!
Unfortunately we didn't have as many trick or treaters as usual, meaning unfortunately I have tons of candy left to eat! Good for my eyes, not for my thighs! ;) I guess since Halloween was on a Saturday more parents had parties of their own, because our trick or treaters were only about a third of the usual amount. We had a few and then a few of the too cool for school kids. You know the type, the ones who throw on Mickey Mouse ears from a trip to Disneyworld and then just shove a trash bag at you. They are above uttering the words "Trick or Treat". I feel so old when I think that back when I was a kid I always said "Trick or Treat" and "Thank you".
What did you all dress up as?
Posted by Joy De Vivre Design at 4:57 PM

Love your costume and the edible graveyard looks delish!

Thank you Angela! The edible graveyard was so good, thanks to my hubby's guacamole. It is the best ever! :)

Looks like a fun Halloween and I love the cake and the edible graveyard! So cute! Your Halloween sounds like the Halloween we had too - not many trick-or-treaters and lots of leftover candy!

Happy Banyan-Thank you! I know. I don't know what was up with the lack of trick-or-treaters this year!