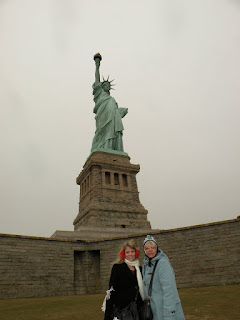 With a blizzard looming in the forecast we decided that the Statue of Liberty should be one of our first stops. Lady Liberty certainly is beautiful, but she is a much better host in the summer months. It is a good thing that the diet I kept saying I was going to go on never made it to fruition or I may have been blown straight into the Hudson!


There are so many gorgeous Christmas decorations adorning the entire city. Many of them are concentrated on 5Th Avenue and around Rockefeller Center, but many other neighborhoods offer holiday cheer as well. 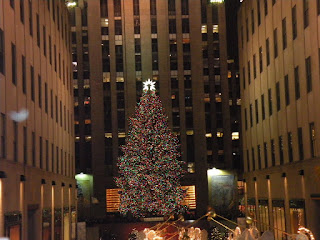 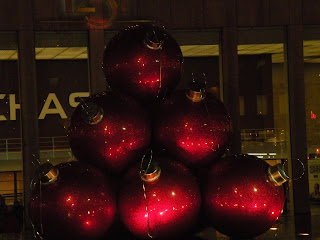 There are several displays scattered around the city in front of various office buildings. These giant red ornaments were some of my favorites.

At night those pesky tourists, as if we were not some as well, bombard the streets which makes taking awesome pictures completely impossible. We found it easier to get our pictures in the morning before it became so hectic. 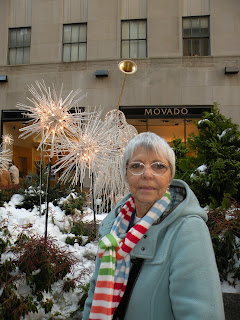 Mom trying to fit in with the angels at Rockefeller Center. ;) Just kidding mom! 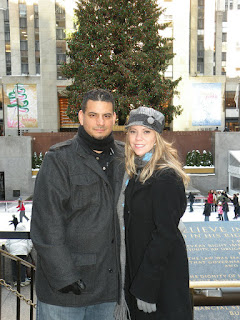 Gabe and I wishing that we were brave enough to get over our fear of frostbite and join the ice skaters below.


The Time Warner Center was so pretty with stars hanging in the entrance. The stars changed colors every few seconds. 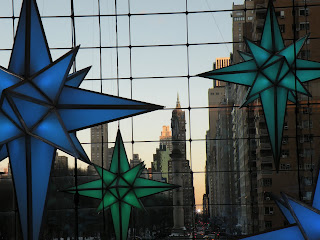 Then came the blizzard..... 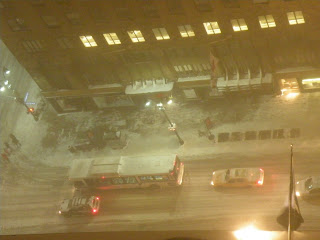 Gabe took this photo as he was hanging out of our room on the 29Th floor. Of course he took the photo while I was changing clothes in the other room as he knew I would have had a heart attack at the methods he was taking to get his prize shot!

So most sane people would have bundled up inside during a blizzard with some hot cocoa and a lovely book. Well, never make the mistake of confusing us with sane people! We, meaning me with a very disgruntled mom and hubby, decided that we were only in New York City every now and then and we should not let a little snow keep us in our room all night! Our room was adjacent to Grand Central Station so we could just take the subway for a few seconds and be in Times Square. Once there the snow should not be a problem at all! Boy does this southern girl have a lot to learn about snow storms!

When we arrived in Times Square and got out onto the street I thought that we had stepped into a snow globe. A snow globe that was violently blowing ice at us. We were so covered in snow by the time we had walked a block that we looked like snow men/women. We, like many of the other crazies, decided to take refuge in the M&M store. 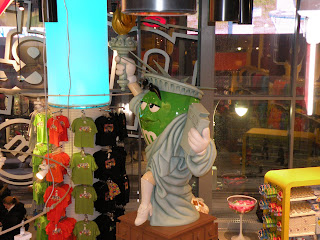 If you have never been here before it really is a cute place to check out, albeit preferably not in the middle of a blizzard. 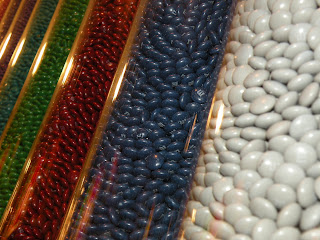 On the upside if we were snowed in we had plenty of my favorite food group on hand-chocolate!


The next morning the wind had stopped blowing and the snow was left blanketing the city. 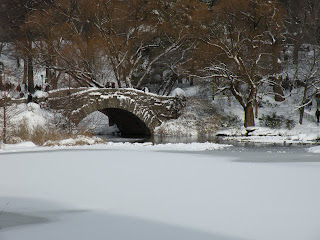 Central Park was so busy with everyone taking in the white stuff. Children sledding, families going on horse and carriage rides, but we just took in the sights. 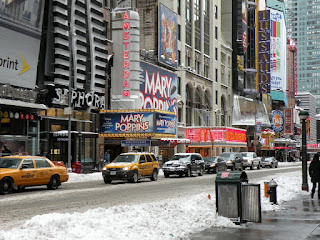 My mom loves Mary Poppins so we went to see the Broadway take on the classic. It was such a good show. I am always amazed at theater actors. They really are the most talented people in showbiz, because they only get one chance at perfection.
Walking around the city is always a treat. The architecture is amazing and you just never know where you will end up. 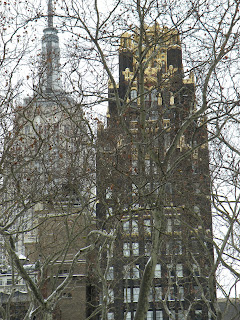 The former Radiator Building, now the Bryant Park Hotel. If you are a fan of Georgia O'Keeffe you may recognize this building from her New York series of paintings which happens to be my favorite of her work. 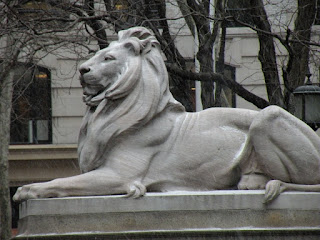 Two lions, "Patience" and "Fortitude", guard the Humanities and Social Science Library. Located on 42ND street and 5Th avenue the public library is a Beaux-Arts masterpiece. It is also, for you fellow Sex and the City fans, the building where Big stood up Carrie on their wedding day.
The Apple Store with the Plaza Hotel in the background. 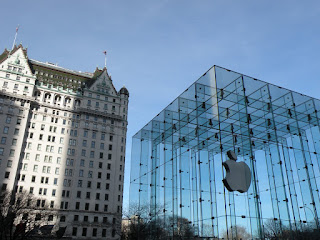 Whomever designed this Apple store was certainly thinking outside the box by creating this glass box. It is a clever concept being that all that is visible of the store on the street level is this cube, the simple apple and a stairwell in the center that leads to the store that is underground.
Even though we were all just a few years over the age of frequenting toy stores, I wanted my mom to see the legendary FAO Schwarz. 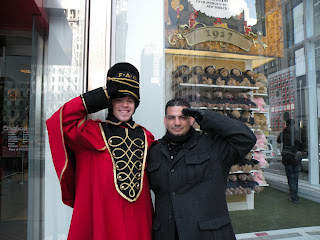 Gabe got into the holiday spirit! 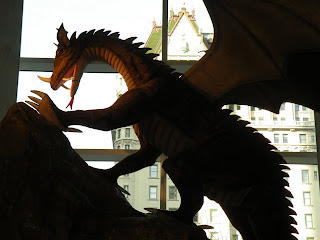 I would not even want to know how much this huge dragon would set you back! 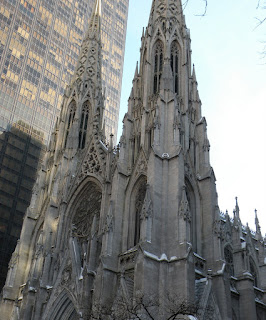 St. Patrick's Cathedral is simply amazing. The inside is breathtaking! Whether you are of Catholic faith or not it is certainly worth paying a visit to if you are ever in NYC. 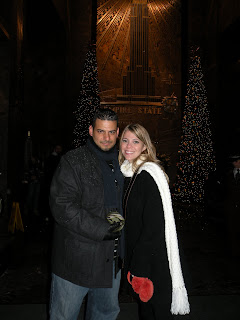 The lobby of the Empire State building was all done up with Christmas cheer. We did not brave the wind and cold to go up to the top, though. 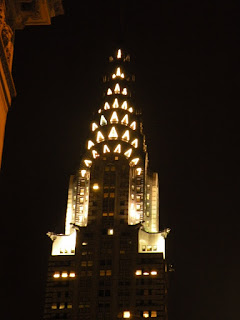 The Chrysler building is my most favorite building and it is at its best at night. 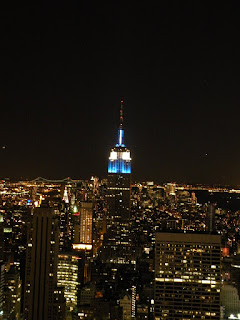 From the Rockefeller Center observation deck you can see wonderful views of the entire city. The Empire State Building was lit up for Hanukkah.

We went to see a taping of Good Morning America. 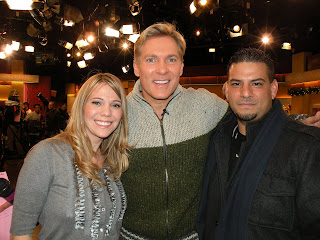 Gabe and I had been on one of their shows before so I pretty much knew how it worked. Here we are with anchor Sam Champion who was so appreciative of everyone being there. Very nice guy! 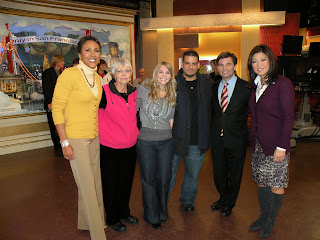 While I was sad that we missed seeing Diane Sawyer as she was starting the nightly news that same night, it was cool getting to talk to the other anchors, Robin, George and Juju.

One of the most memorable parts of my trip was finally getting to meet someone who I had only known online. Dorkys and I have been blog friends for quite some time so we asked her to meet up with us when we were going to be in her hometown.
Dorkys, the very talented lady behind Dry As Toast, met up with us on a very lovely day. I am using the term lovely day in place of a 18 degree day with wind that would knock you down and snow blowing in your face despite the fact that Dorkys was very prepared with an umbrella! Thanks Dorkys for not bailing out on us and instead staying home in the heat with Toby! 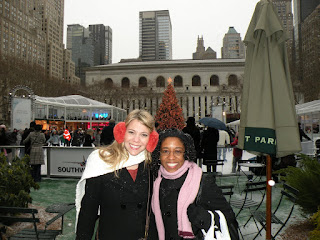 Dorkys was such a great tour guide and a gracious host. She even showed us to the nearest cupcake bakery,(a girl after my own heart)! After knowing Dorkys online I knew she would be an awesome person to hang out with, and of course I was right! :) It is so funny that you can meet someone through a blog that you have so many things in common with and so many things to talk about. Dorkys-thanks so much for the wonderful afternoon! We all had a great time!

So after a blizzard, a Broadway play, city lights, Christmas sights, perfect maneuvering so that my father could see me on television waving at him and meeting a wonderful new real life friend, it was time to say good bye to the city once again.
New York, you may have frozen me to death this time. You may have spit snow on me. You may have made me think that I would never again be able to wear cute sandals as I thought it was huge possiblity that my toes would have to be removed from frostbite. But despite it's frosty exterior I once again leave agreeing with it's popular slogan, "I Love New York". As I waved goodbye to my favorite building I am already counting down the days until I can once again return to the greatest city in the world.

I've been to NY twice...the first time was at Christmas and I loved it!! I truly enjoyed your picture tour!!

It sounds like a GREAT trip! How fun!!!! I think you need to share you little trick of getting on GMA. We tried but were not successful when I was on a girls trip in October. I want to take my mom to the City and now you've really inspired me to do so!

I was there at the same time last year. The whole weekend the weather was in the 70s! Sounds like you had a tougher time, but you certainly saw a lot!

What a wonderful recap!! You managed to squeeze in more action into a couple days than I have in my lifetime! (Shame on me.)

I'm so happy to hear you guys had a wonderful time and those pictures are amazing! Way to go Gabe :)

This trip looked like so much fun and the snow is beautiful.Iam glad the snow was there and not here though..Iam such a wimp when it comes to cold weather

Annette-It is lovely at Christmas! We have been twice too, but love it so much that we will be going back as much as possible!

Pam-I think the trick of getting on is to just sign up everyone in your group that is going. Doing this makes you have mulitple chances to get tickets. Also stagger the times that you sign up. I signed up for myself one week, my mom the next and then my hubby at the end to maximize our chances. I also noticed that the day we went there were not very many people with tickets and several groups who had no tickets were allowed inside.
Here is the link to the form to sign up for tickets if you need it:
http://abcnews.go.com/GMA/tickets-good-morning-america-audience/story?id=144752

Amie-You lucky girl! 70 degrees would have been so beautiful!

Dorkys-LOL! Don't worry you have a lifetime to do everything there. We have to put as much into a few days as possible! Gabe says thank you. Mom wanted me to pass along hello to you as well. She just loved you!

Looks like a great Christmas!! I've always wanted to be in NY for Christmas!