I haven't posted any comments on my blog about what's-his-face! I refrained from making comments when his wife went all Lifetime movie on his butt and beat him down, (allegedly), with his own sports equipment. I kept mum about it all, because well...what is the point when every waking second that is all we are hearing about these days.

I have noticed one thing through this whole ordeal, though. The lines between rich and poor are very apparent in situations such as the one Mr. Woods has found himself in. When a poor man cheats he is a sorry piece of crap. When a rich man cheats he is a sex addict. Doesn't the term sex addict sound much better? It sounds as if the person has a sickness that they could not help. Maybe if he would have had an antibiotic for his addiction he would not have cheated with half the population of the world! It sounds as if they came up with medical terminology to justify such a selfish behavior. Whatever!

Since I refuse to post a picture of what's-his-face I would like to leave you with this adorable tiger: 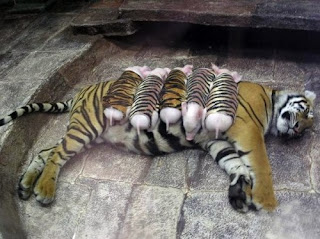 Instead of being a pig this tiger is helping to take care of them.

Awwwwwww, that is too cute!

Let me play devil's advocate here... His behavior is no more selfish than say a person that eats too much or a person that smokes or even a person that denies their partner sex. We have no idea what their living arrangements were like. She could have been the worst person to live with so, instead of coke, cigarettes or overeating, he chose sex to deal with it. She could have been a prude and snubbed him when he wanted to express himself in bed. There's a million scenarios we could imagine and only one real one that happened.

Selfish behavior comes in many forms. Acting out sexually is as selfish as overeating, smoking, doing drugs, gambling, drinking excessively... the list can go on.

I don't think calling him a sex addict excuses the behavior either. People are still unfortunately appalled. The society [namely America] we live in is so sexually oppressed that we crave it in the same moment we deny it. Yes, the term is sex addict. It has been used in poorer circles, but only amongst the educated. I don't believe this is a class differentiation but more a lack of education amongst the Springer types. Simpler terms being more popular amongst the simple.

I am in a relationship with a sex addict. He has yet to venture, but I wait for the day and do not dread it. I understand his need and support him no matter what. He is not his choices. Being supportive, I believe, helps him value himself more. Though still, I wouldn't be upset when the inevitable happens. I am not blind, nor am I ignorant. I create my own value, it is not ingrained in him or our relationship.

So, obviously this subject hits very close to home for me. I just hope I was able to clearly speak for the other side.