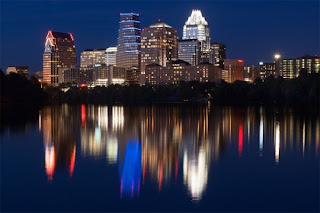 For a city whose slogan is "Keep Austin Weird" you would expect that Austin, TX would be a place with some very interesting stories. If that is your expectation then this is not a city that will disappoint you. Austin is a city with live music venues around every corner, plenty of outdoor space to get your green on and people that live with the attitude of live and let live. I suppose that a place like that would be somewhere you would never want to leave....and as you will see in some of these tales, some people never do! 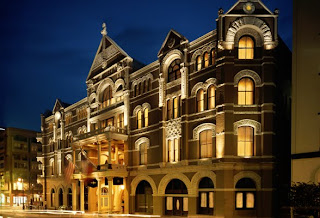 Built in 1886 by cattle baron Jesse Lincoln Driskill, the Driskill Hotel is everything you would think a grand Texas hotel would be. The scale is large, leather furniture, the Texas star featured prominently; this was the dream of Mr. Driskill. I must say, what a dream it was! The Driskill Hotel, built in the Romanesque style is the type of hotel that makes you want to wear your Sunday finest, just so you can fit in with the beautiful surroundings. The Driskill has a way of getting people to come back, some even after they pass away.

The Driskill is believed to be haunted by several people. One of these people is none other than the creator of the hotel, Jesse Lincoln Driskill. He has made himself known with the smell of cigars at random times. Perhaps he doesn't approve of the no smoking ban being placed upon his hotel. Mr. Driskill has been seen in many areas of the hotel as if he is still roaming the halls making sure all is running smoothly.
Another of the Driskill Hotel ghosts is a four year old girl. She was the daughter of a US Senator who met her untimely death while playing ball on the stairs. The innocent little girl fell and died. It is said that she still haunts the grand staircase leading down to the lobby.

The Driskill Hotel is located at 604 Brazos Street if you are ever in town and would like to take a look around. From what I hear, they do not really enjoy people coming in off the street and asking questions about their ghosts so I would recommend just taking a look around on your own. If you ever decide to stay there, just do not stay in Room 29. That room is known to be haunted by a woman who shot herself in the bathtub there. 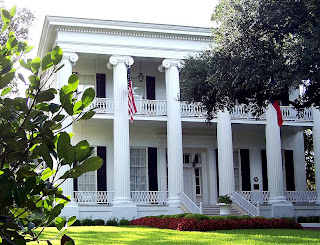 Built in 1856, the Governor's Mansion is a stately Greek Revival home across the street from the Texas State Capitol. For the governor's of Texas this has been their home since it was built, but they do have to share it with others.

One of those other people taking up residence in the Governor's Mansion is believed to be none other than Texas hero Sam Houston. For those of you reading the other tales this week, Sam Houston was the man who led the army to finally capture Santa Anna, who had defeated the Texans so badly at the Alamo. He is also the namesake of my home, Houston. I suppose since he is such prominent figure in Texas he figures that he deserves to live in style at the head of the state. He is believed to mostly haunt one of the bedrooms that includes the bed that he bought for the mansion.
A death at the mansion in 1864 is behind one of the other haunts at the home. Governor Pendelton Murrah was in office and his family was living in the home. Unfortunately, tragedy struck when his nephew took his own life there after being turned down for a marriage proposal. Reports of footsteps pacing, moaning and doorknobs turning have been attributed to the nephew who apparently still pines for his lost love.

In June of 2008 the Governor's Mansion was the victim of arson and sustained significant damage. It is such a shame that vandals have no respect for history, but government and private funds are making great strides in restoring this important part of history. 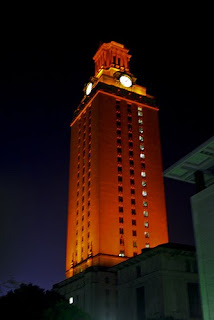 On August 1, 1966 a horrific crime was committed in Austin. After all was said and done that afternoon, fourteen people were dead for doing nothing more than being in the wrong place at the wrong time. The story went like this: Charles Whitman, an ex-Marine and a University of Texas student decided to barricade himself in the bell tower and act as a sniper to shoot people. Most of the victims were on Guadalupe Street, also known as 'The Drag', below the tower. Whitman had already killed his mother and wife before he went to the tower and ascended the stairs to the top that would be his final destination.
Whitman, perched in the highest spot in the city, must have thought he was invincible in the tower and that no one would apprehend him. Attempts at getting up to his location proved to be deadly for several who first tried. Fortunately, the rampage, which lasted from 11:35 AM to 1:24 PM was ended when police officer, Ramiro Martinez shot Whitman to death.

After his death, it was discovered that Charles Whitman had a cancerous brain tumor that may have caused him to commit this crime. Is Whitman now, in his afterlife, sorry for the pain that he caused ? Was this man, just like those he killed, just a victim of his mental condition? One will never know the answers, but for some reason it is believed that Whitman still visits the tower. Lights coming on by themselves, doors being locked and unlocked with no one around, those are just a few of the happenings at the bell tower after that fateful day in 1966. Whatever the reason, when I am visiting Austin and see the UT orange glow lighting up the top of the tower, I can't help but think that building has something unexplainable going on.

Don't let these stories scare you away! If you have ever been to Austin then you know how truly awesome it is. If you have never been there, what are you waiting for! :) Whether you are trying to get a glimpse of a ghost or possibly have an encounter with your favorite rockstar Austin is the place. With its small town feel, but big city opportunities Austin is one of my most favorite cities. For any first time visitors you must see the Texas State Capitol, stroll down South Congress, see a live band and check out the bats flying out from the Congress Avenue bridge every night. A city that celebrates bats, ghosts and very eccentric people, the motto 'Keep Austin Weird' makes perfect sense there!
Posted by Joy De Vivre Design at 7:09 PM

Great stories! We in the South have the best tales of ghostly activity, don't we? :)

Thank you EmptyKnits! We sure do!