Galveston Island is a coastal town about 45 minutes south of Houston. Galveston may not be as large as its neighboring city, but this 208 sq. mile stretch of land has many a story to tell. Once inhabited by Indians, the site of the 1863 Battle of Galveston during the Civil War, the playground for everyone from pirates to Frank Sinatra, this is a small island with a huge history. Hurricanes have come across Galveston many times, but the 1900 storm on September 8, 1900 is the saddest day in Galveston history. On that day more than 6,000 people lost their lives to a powerful hurricane that pushed it's way over the island. Whether it be curses from the Indians, the pirates, the lost soldiers or those who lost their lives September 1900, something has stirred up paranormal activity on the island. Galveston has numerous ghost stories and haunted places, so many that there are year round ghost tours given and many more just during the Halloween season. You, my lucky readers, can save your money, have a comfy seat and I will give you the run down right here! 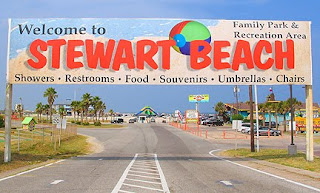 Stewart Beach is an area at the far end of the island with one of the widest stretches of sand in Galveston. Many people come down on the weekends to play volleyball, frolick in the sand and swim in the water. It has also been said that some people have seen a male running across the beach that was not quite like the others. He wasn't not quite like the others in an uber handsome George Clooney kind of way, he was different in the way that he was a ghost!

It would be no stretch of the imagination to think that this stretch of sand could be haunted. This for one was the side of the island that the 1900 storm swept across so it is quite likely many were killed in that very spot. Also, a bit of sad history happened there just after the storm. It is said that when so many lives were lost in Galveston at one time, there was no room to bury all of the bodies. The officials had the idea to take the bodies off to sea on barges and dump them. Unfortunately, what they did not expect was that these bodies would float back to shore, as many of them did, onto the beach. With the island in shambles and no other choice, the bodies were gathered and huge bonfires were made in the area where Stewart Beach is now. The bodies that had washed ashore were placed in the fires and cremated. The sadness of that event is drastically different than the picture you see of the spot now, but perhaps the running male ghost is a reminder to all of us who are brave, or crazy, enough to live along the water.

Ewing Hall at UTMB-Face on the Wall 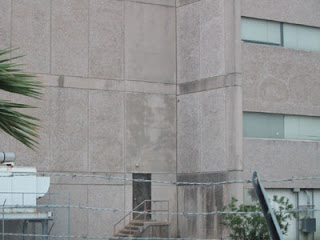 To see the face look at the square panel just above the door and staircase.

Perhaps the most well known of the Galveston haunted stories is the mysterious face on the wall. Ewing Hall, one of the many buildings housing the University of Texas Medical Branch, is located facing the harbor. Many years ago this building got a new resident and it wasn't a doctor. A strange face appeared on the outside of the building and despite attempts to sandblast the face off, it still keeps coming back.
Who was the face? Some people believe that this is the portrait of a fisherman who once owned the land and was upset that the university had his land and tore down his home. Others believe that it is the face of the pirate Jean Lafitte who had such a sordid past in Galveston. We may never know the person behind the face on the wall, but I will tell you from experience that it is very eerie. 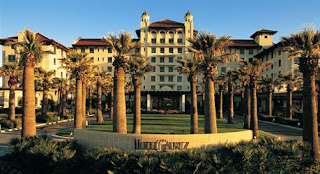 The Hotel Galvez is one of the finest hotels in Galveston. Built in 1911, this grand building is set across the street from the beach. Once playing host to presidents, such as Lyndon B. Johnson and Franklin D. Roosevelt, as well as celebs such as Frank Sinatra it now also plays host to some very unique guests.
One of these unique guests is believed to be a young lady who thought she had lost the love of her life. She was staying at the Hotel Galvez awaiting the return of her fiance, who was off working on a ship. After hopefully waiting for him to come back to meet her she was given heart wrenching news, that her love had died while out at sea. Feeling that she could not go on without him, she climbed up in one of the turrets and hung herself. Unfortunately if the lovelorn lady would have waited she would have gotten the word that her fiance was in fact still alive. The story that he had died was a mistake.
While the lovelorn lady is one of the most well known stories surrounding the Galvez there are other spirits believing to roam the floors there, especially the 5Th floor. The Hotel Galvez has always been good about allowing people to come inside and ask questions and look around. They are even getting into the Halloween spirit by offering ghost tours of the hotel to the public. From what I hear, though, if you are staying at the hotel you can get a tour at any time of the year. 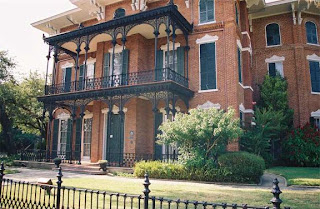 Built from 1861 to 1865, this stately mansion on Broadway still stands as a symbol of the great wealth that the island held before the 1900 storm. Built by James Brown a hardware business man, this three story home has served as a party place for the very wealthy as well as a hospital for the confederate soldiers during the Civil War.

During it's more happy moments the Gold Room in the Ashton Villa was used as a formal living area. It was a very lovely room and apparently Mr. Brown's daughter Bettie was quite fond of this room. So fond, that she keeps coming back after death to visit this very spot. Many areas of the house have stories of haunting associated with them, but most seem to concentrate on the Gold Room where furniture moves by itself and clocks stop. There have been tales from the Ashton Villa of guards hearing a piano or parties going on at night, but when they go in to investigate the shenanigans the entire room would be deserted.
Ashton Villa offers year round tours if you would like to go and investigate yourself. There are also several other of the mansions from Galveston's heyday on the same street, such as the Moody Mansion and the Bishop's Palace. If architecture interests you as much as ghosts, these homes are certainly worth visiting.

Galveston Island is a place that I know very well as I grew up nearby. I had to shorten this list to these few places, because frankly the ghost stories from the island would take up many, many pages of my blog. When you spend time there it is hard to ignore the history that has taken place on the island. We will never know if these lost souls are still trying to figure out why they were killed during the great storm, if they were young soldiers killed by a horrendous war, or just other individuals who were here for the happier times in Galveston history and refuse to leave now. If you are ever in the area, though, it is a great place to learn a little Texas history. History of those who had their city destroyed at a time when it was one of the greatest in the country and brought it back to life with their hard work and determination. It is also a story in recent history of people with just as much determination who are bringing back their island after Hurricane Ike. 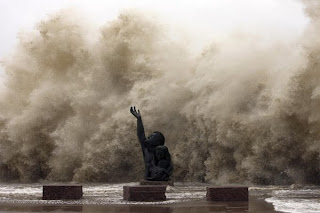 Yikes! LOL These are great tales...thanks for sharing!

fookaDESIGNS-you are very welcome! There are many more to come the rest of the week!

Oh my God!!! I just could not leave reading your blogpost midway. This info is too gud. Imagine ghosts roaming around us in this day and age.

It must an experience worth having.