Do Not Watch As Seen On TV Infomercials in the Middle of the Night! 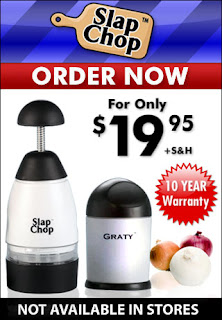 Over the weekend, after waking up at 2 AM and not being able to fall back asleep, I found myself contemplating the SlapChop. Much like the time I was just seconds away from grabbing the phone to order the box set of the Best of Disco, the infomercial voice was pulling me in at my most vulnerable of times.

The voice from the TV starts telling me very quickly all of the things that I can do with this contraption. I will be able to chop fruit in seconds, never need to change the blade. It comes with a free Graty for cheese and I LOVE cheese! If this man has to talk with so much urgency about this chopper it has to be amazing. I mean if he has to talk 10 words per second just to fit in all of the benefits it is bound to be worth a mere $19.95!

Thankfully, I fell asleep before I could make a purchase and when I woke up with all of my sense, well as much sense as I can usually muster, I realized a few things about these infomercials:

Have any of you ever been pulled in by the fast talking As Seen on TV guys? Please do tell!

I am an absolute SUCKER for those infomercials. Good thing I wasn't awake to see that or I would have ordered one and gotten two for free within a matter of minutes!

My friend was obsessed with the Ready, Set, EXPRESS! unit. You know, the flashy red one with multi-styled inserts to make mini omlettes or tiny cakes? See, the oven in her mother-in-law cottage has never worked. Its brand new and the landlord forgot to hook it up. My friend is afraid to tell the landlord because she thinks if she rocks the boat, he will kick her out. She also thinks if she asks the gas company or handyman to fix it, they will report her for code violation and she will get kicked out. All of this is nonsense, as we all know (guess this couldve gone under the "phobias" list, too!) So the appeal of the Express is that she can make cakes. So we spent one entire Suanday channel surfing until we found the commercial. Then she ordered it (45 minutes on the phone...what BS!) And now she calls me daily with the latest game, "What Suzee cooked in the Express."
Blech.......