Yay for the Weekend! 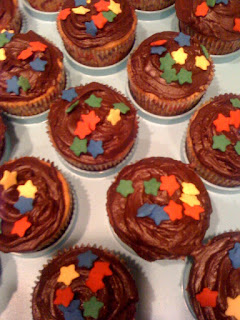 This has felt like such a long week! I guess adding an extra nine hours of overtime did make it a little longer, but that's life.

Last night my home reverted back to the 1800's. For some reason unknown to me our cable company was having difficulties which left our home with no phone, no cable and worse yet no internet! Thankfully everything is in working condition now.

During my boredom I was able to bake cupcakes for one of my coworkers for her birthday. They were so cute until she turned the cupcake holder on its side and there was a major pileup in cupcake land. While they were no longer pretty they still tasted good!

Wednesday I had to go to a party for one of my best friends, who also works with us. I use the term party loosely as it was a get together to say bye as she is going to another job. It was fun, despite being sad at the same time.

So that is all of the excitement I have for you all since we last chatted. I use the term excitement loosely as well!

I will leave you with a random thought that I had earlier. If you have your facebook linked to your job is it not the slightest bit inappropriate to have photos of you in a swimsuit looking like you are trying out for Maxim? Hmm...
Posted by Joy De Vivre Design at 10:01 PM

Thanks Almay! I made sure to give them all away before leaving work. I did not need the temptation of cupcakes on my counter.

I think that people don't realize that employer's, both present and future, know how to google. :)