Sex and the City 2 the Countdown-Celebrating the City

It has been said that Sex and the City had five main characters-the four girls and New York City. Indeed that seemed to always be the case. While shows that ran during its original run on HBO, shows like Friends and Will and Grace, were set in New York the most you ever got as far as shots of the cities were a few seconds of buildings spliced into their real film location of
Los Angeles. 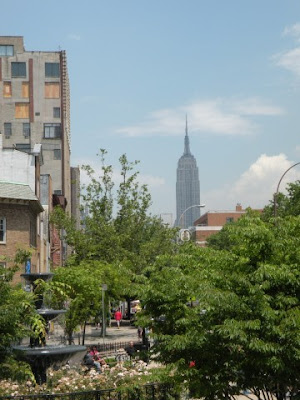 Sex and the City was different. They took the city and intertwined it into all of the story lines. They shopped in the real stores not in some recreated set, dined in restaurants that they would make popular overnight and had hoards of tourists on buses to drive by Carrie Bradshaw's apartment. If you are going to NYC and want to see the sights from the show there is an actual Sex and the City tour that you can take that will drive you to all of the hot spots. If you want a more economical tour or just want to relive your favorite moments from the show I have compiled a list of some of the places you may remember from Sex and the City: 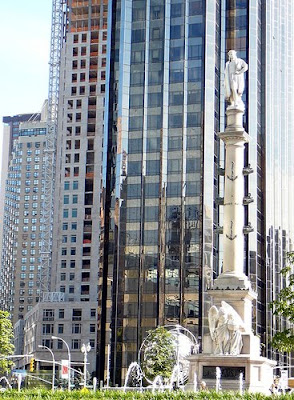 Who can forget the scene below where Carrie in her beautiful white dress, rejects Aiden and they finally come to the realization that they want different things. The fountains at Columbus Circle provided a beautiful backdrop for a not so happy ending. 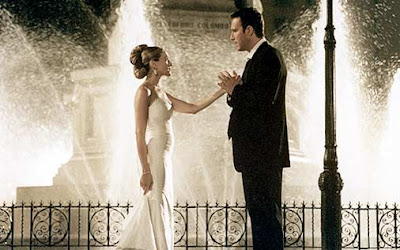 While we are on the not so happy ending talk let us next go to the NY Public Library at 42ND and 5Th: 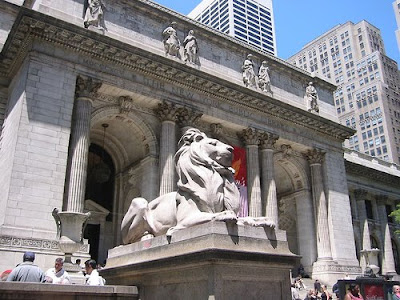 This location was the scene for two very memorable Sex and the City moments. First of all do you remember when Miranda was armed with those life changing words "He is just not that into you"? She then wanted to spread her wisdom to others, despite the fact that they wanted no part of it. The stairs outside were the spot for Miranda's Dr. Phil moment.

Anyone who has seen the first movie also knows that this is the location of Carrie and Big's wedding meltdown. The staircase on the right is the very place that she received the news that Big wasn't showing up. 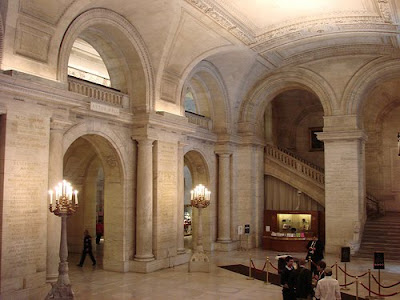 On a side note I highly recommend visiting the library if you have a chance. It is truly a breathtaking building and definitely worth spending some time exploring. If you love architecture you will enjoy it and the Sex and the City memories will make it even better. 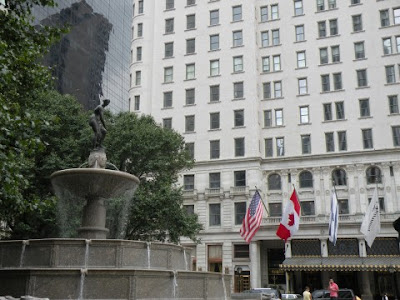 I promise we are going to get on to happier times shortly! The Plaza was also the setting for more than one Sex and the City moment. The first was when Carrie lost it when she had to read a poem for Miranda's friends wedding. She pretended that she lost it because she was happy for the couple, but in reality she was hurt because Mr. Big had received a phone call during her poem and she felt neglected.

The next time the Plaza Hotel was featured it was also during a scene with Mr. Big and Carrie, but this time it was an outdoor shoot. Carrie walks past the Plaza just in time to see Big and Natasha finishing up their engagement party. He sees her and walks over. She asks him why it wasn't her and we all know how that ends. She quotes The Way We Were and tells him "Your girl is lovely Hubble". With that she leaves him confused and turns and walks, hair blowing in the wind, out of his life...temporarily of course! 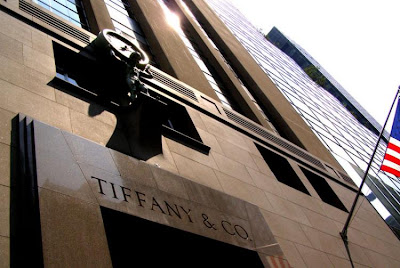 Wow all of these breakups! I promised to get this going on an up note! Tiffany & Co was the location where Charlotte pretty much proposed to herself....with a little help from Trey. Alrighty!

If you visit Tiffany & Co you are in the right vicinity of many of the shops featured on the show. 5Th Avenue is a plethora of amazing world class shopping and one that is getting much attention from Sex and the City 2 is Bergdorf Goodman at 754 5Th Ave.

Let me give mention to a few shops that are must see SATC hot spots off 5Th: 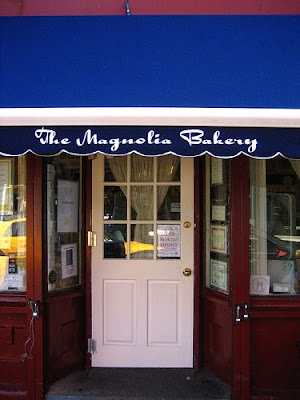 The Magnolia Bakery at 401 Bleeker St.

The cupcake place made famous by Carrie and Miranda is the Magnolia Bakery. Expect a line if you pop in here for a sweet treat.

While you are in the neighborhood: While this is not the real street address listed as Carrie's address on the show, this was the apartment where they shot the outside scenes for the show. If you visit please beware as I have heard the owner does not enjoy all of the Carrie fans who flock to her stoop! I don't know about you, but if I owned that apartment I would have a Sarah Jessica Parker cardboard cutout and offer photos on my steps for $10 a pop. Heck I would even offer a SATC wardrobe to go from tourist to stylish for your photo....for an extra fee of course! ;) What is with these people who do not want to be entrepreneurs! A bonus tip here-while you are in the area keep your eyes peeled for Ms. SJP herself. She literally lives seconds away from her character's apartment. Out of respect for her and her family I am not going to post her real address here, but you may just see her out and about! 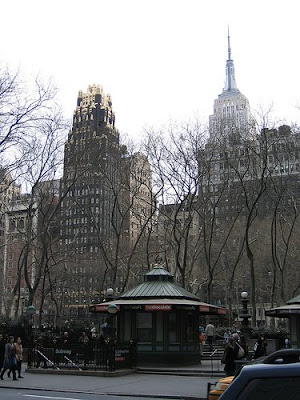 Like many of the other locations, Bryant Park has been featured several times on various episodes. During fashion week this location is turned into a tent city housing all of the top names in fashion. It was fashion week when Carrie, wearing her Dolce and Gabanna brilliant blue coat and jeweled underwear became fashion roadkill. It was also fashion week on the first movie when after the girls went to the show, Samantha was met with angry women upset that she was wearing fur.

Bryant Park, while much smaller than Central Park, is still a great place to visit. The NY Library featured above is adjoining it and it is very close to major tourist attractions such as Times Square. The classic carousel below is in the opening scene of Sex and the City the Movie as Charlotte and Harry have little Lily out for a day in the park. 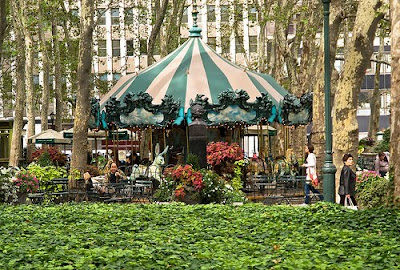 There are so many locations in the city used for filming so let's quickly run through just a few more: 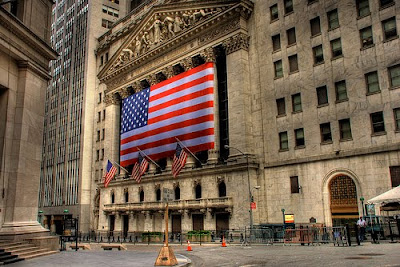 One of the few times we ever saw Carrie Bradshaw in a subway station was when she was desperately trying to get to the NY Stock Exchange in time to ring the opening bell. 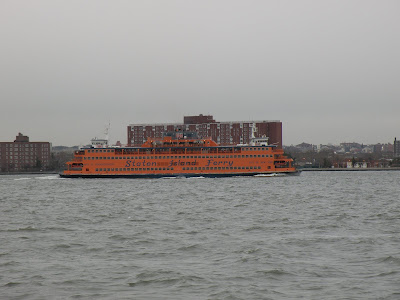 She may have been drunk, but she was sober enough to have a vision! Charlotte shouted from the ferry "I'm getting married this year!" as Carrie tried to make sure she didn't fall off the ferry before she could make that a reality. 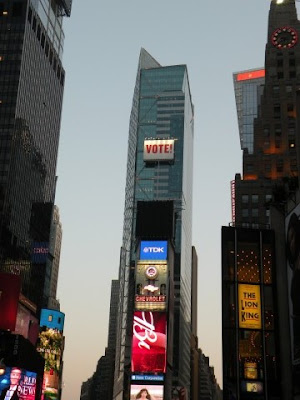 As Smith's PR guru, Samantha was able to get him a very provocative billboard right smack in the middle of Times Square. He was more embarrassed than thrilled at first, but in the end it was the catalyst that put his career in the right direction. 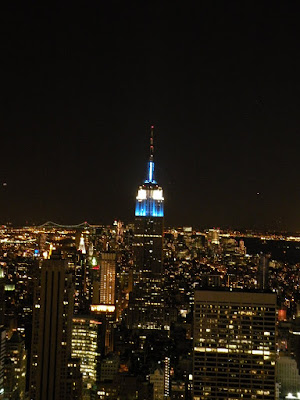 This week instead of a trivia question I think we will do something different. Tell me about your favorite scene from Sex and the City,(please keep it PG as there are little ones who stop by from time to time as well).

Once you leave a comment you will be entered to win the soundtrack from Sex and the City 2: 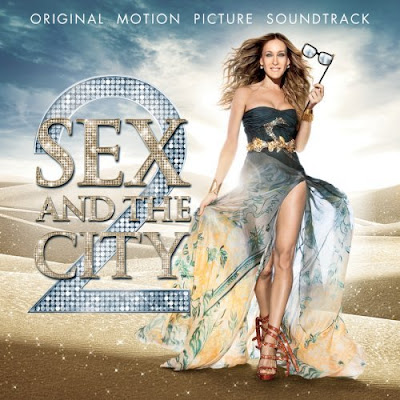 Win it before it is even released and it will be mailed to you on May 25Th!

Leave a comment now until midnight Sunday! Check back on Monday to see if you are the lucky winner. Best of luck to all!

Posted by Joy De Vivre Design at 4:00 AM

I think you actually managed to capture in a "thumbnail" much of the glamour and excitement of NYC in just a few paragraphs and some excellent pictures.

I want to thank you for the Carrie Diaries! I got the giveaway prize in the mail yesterday in perfect shape and at an excellent time since I was just scrounging around for a new book to read! :) Thank you, thank you, thank you!!!

:) Hope you are having an awesome week! Maybe even get to that incredible library with the big lions out front (or Columbus Circle!)

Is it possible to just have 1 SATC favorite moment... They are all my favorites!

My fave SATC scene is actually from the first movie when Charlotte has an "accident"...it was so hilarious especially because Charlotte is so prim and proper.
throuthehaze at gmail dot com

Intense Guy-Thank you so much! You made my day when I read your kind comment yesterday! Sorry I didn't get a chance to reply then. :) You are so welcome. I hope you enjoy it! I am having a great week and I hope the same for you.

I so wish I could be in NYC right now! I miss that city and wish I could be there much more often than I can. The last time I was at the library was with our lovely friend Dorkys in the middle of not so lovely weather! LOL! It was still a great time!

Stunning-Thank you so much! I am so glad you enjoyed it! It is hard to pick just one favorite isn't it!

throuthehaze-That was a funny one! I love Charlotte. She makes the funniest facial expressions!

As a Sex and the City fan, I love this post!

My favorite scene? When Big was moving to Cali and him and Carrie danced to Moon River.

Oh, I just thought maybe you meant the movie? Definitely the last few minutes of the movie when Big and Carrie got married and she saw all her friends waiting outside.

Wow, thank you, thank you!!! Can you post the photo of you with the bag on the Rafe New York Facebook wall? Want to include you in my blog.
http://rafeloves.rafe.com

sugarlens-Thank you! OH I love that scene too. Now anytime I hear that song it reminds me of the show.

I love that scene in the movie as well when she doesn't know the other girls are there. My favorite is when he proposes with a shoe. It gets me everytime! LOL!

Rafe-You are so welcome! I really love it and I think you are doing wonderful things for people. I sent you a photo to your fb fan page. If that one looks silly just let me know and I can send another. It would be an honor to be included in your blog. :)