Whatever Happened to If You Don't Have Something Nice to Say then Don't Say Anything At All? 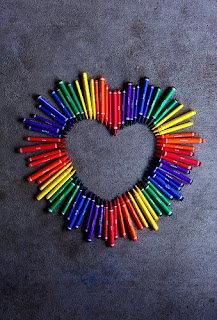 Remember when we were children and our parents would tell us to be kind to one another. The adults in our lives would give us words to live by like "Do unto others as you would have them do unto you" and "If you don't have something nice to say then say nothing at all"? Unfortunately as some of us get older it seems as if those sentiments go down the drain! While I usually try to keep things fun and light on Joy De Vivre, heck I try to do that in real life as well, sometimes you see things that anger you. Yesterday I saw one of those things!

As we were driving home from my hair appointment, yay I am really blonde again, we passed by a corner on the road in a nearby neighborhood. There were two men, both with mullets, both looking straight out of a Journey video circa 1983. They were holding big signs and as we were turning the corner we got up close enough to read. I am not going to write exactly what the signs said as they were beyond horrible, but it was to the point that if you were in a same sex relationship you would be doomed to hell and it was a sin. To make matters worse they had a little child with them while spreading hatred. It always amazes me when people place judgement and then speak of religion that they forget you are not to judge one another.

I wanted to go to the nearby store and buy two poster boards, one to write "Ignorance is a Sin" the other "You are Doomed to Hell for the Fashion Choices You Are Making", but my worried hubby told me I would probably get into a big fight with two guys and stopped me. Gabe knows how I get when I get on a mission so after he calmed me down I realized that getting into an argument with Journey #1 and Journey #2 would have done absolutely no good. They would still be clueless.

We may live in a free society, but unfortunately that doesn't mean free of judgement or free of ridicule. Personally, I could care less what color someone is, what religion they believe in or who they are going out with, (as long as it isn't my hubbie). The fact that people are diverse is what makes life interesting. While not everyone may have open thinking about certain topics and it is every one's right to believe what you wish, is it so wrong to keep that thought to yourself if it is going to cause pain to another person?

...unfortunately, the heat and humidity will bring out even more of the nut-cases...

It actually was hot and humid yesterday! Something tells me those two would be just as crazy in the winter though!

I really do! My coworker always tells me my hair matches my brain whenever I get my highlights retouched. :( LOL!