A Curse or a Blessing? 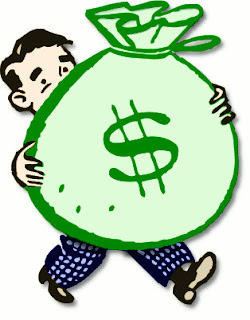 Lottery frenzy seems to have taken over the country this week. One of the reigning themes that keeps popping up is the curse of the lottery and how winning isn't always a blessing. Of course money isn't everything, but coming from a girl who grew up with more of a plastic spoon in her mouth than a silver one, it sure as heck can't hurt. Let me break down for you what a difference a few million would make:
1. An abode without air conditioning would be an island hut overlooking the ocean...not an apartment without air in the sweltering Texas sun.
2. You would shop at resale shops because you were trying to be one with the regular people, not because that was your only choice.
3. Tiny amounts of food would be consumed in hip and trendy restaurants because nobody really eats in hip and trendy restaurants. Not because you were running low on funds that month.
4. Your work would be something you are passionate about. I would personally own a shoe store that hosts drag queen bingo every Friday night. How fabulous would that be!? And of course during the day I would help puppies, kitties and little old ladies.
5. Your neighbors would kindly knock on the door to come in the house. They would not knock out your window to come through like ours did in my old neighborhood.
A wise Gene Simmons once said:
"The root of all evil isn't money; rather, it's not having enough money."
Well said Gene, well said.
Posted by Joy De Vivre Design at 9:34 PM

Funny, I was just thinking - winning this mego-jackpot might actually be a curse. How do you get the media off your front porch? and have a life of normalcy afterwards?

I think you would probably have to move before they realized who you were...get all of your ducks in a row before you went to collect I suppose. Though I did know a family in the town that I grew up that did an interview in the paper when they won a few million. Let's just say considering my home town that was not the smartest decision. Lottery winners plus crackheads do not mix! LOL!