Unfortunately in Hollywood most things do not glitter quite so brightly in the light of day.
The stars usually don't shine once you see their reality is vastly different from the silver screen. Thankfully though, there are a few that make you want to root for them. A few actors and actresses still exist that you can admire in real life as much as you care for the characters they portray in your favorite movies. Sandra Bullock is one of those few for me as I know she is for many of you.


Sandra always seems to step forward to give when needed in a quiet way, not in a photo opportunity way. You all know the type of stars that always seem to have a camera around when they are picking up a sick baby or handing out bags of food. Sometimes I think in the back of my mind that some of those celebs drop the baby and eat the food themselves as soon as the camera lens is firmly in place. Sandra Bullock, thankfully, has never seemed that way. She made me a bigger fan when I once saw her on TV talking about her home in Austin and how excited she was that they had gotten a Whole Foods in the city. So very down to earth from someone who could easily fly across the world for any cuisine she wanted. Plus I think she has great taste in her pick of cities as Austin is one of my favorites.

This week our girl has been having a few issues, but I say
let's celebrate Sandra Bullock for the awesome chick that she is!

I loved this Alexander McQueen number. The brilliant blue details made it my favorite of hers this award season. 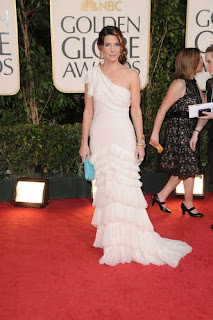 A much softer look for Sandra here in gorgeous flowing ruffles. 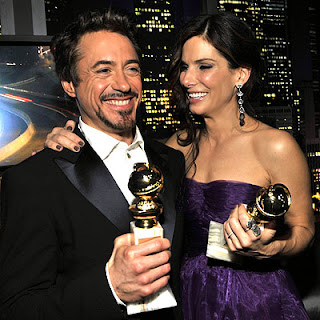 I shall overlook my jealousy at the fact that she is standing with Robert Downey Jr. whom I love. But geez Sandra would it kill you to stand a few inches away from him! :) Standing so proudly with her golden man. Such an accomplishment!

You be proud Sandra for being true to yourself in Hollywood and being well...normal! And note to jerk man and ugly forehead tattooed woman...you deserve each other! Nobody messes with Gracie Lou Freebush and comes out better in the end. Did you not watch Miss Congeniality 100 times like I did? Well you should have and you would have known better!

I agree with you 100%. Sandra Bullock seems so normal-like she could be your friend IRL!!!

three words...So...Darn...Cute ( your post and Sandra). She actually went to the same Whole Foods I go to. I live 10 min. from where she used to live up until last week. My friend spotted her in Whole Foods once and when she noticed that he noticed who she was she gave him a wink! How cute is she!!?!

I really enjoyed her new movie!

Pamela-She does seem so normal. That is so refreshing when you see diva like behavior from so many others.

Peppermint Sage Designs-Thanks! That is so cute that she winked at your friend. That is a good way of saying I appreciate you recognizing me, please don't freak out and start yelling. :) I can imagine your area is filled with crazy people trying to get a scoop right now.

Plantress-I did too. She deserved her Oscar for that performance.

I just finished watching The Blind Side tonight. Loved it!! Sandy deserved her Golden Man for that one.

And you are probably so right about the wink, she was probably just hoping that my friend wouldn't freak out.

Sandra is one of my favorites... I cried through the Blind Side... So moving!