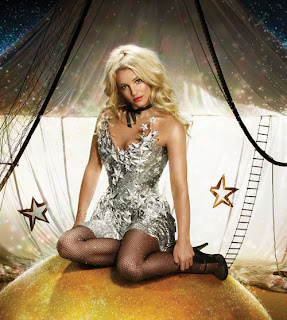 I think I have bad concert karma lately. I have been to tons of shows, but lately it seems that craziness ensues every time. It started at Cruefest when I almost was stabbed to death by an elbow belonging to a girl trying to get in front of me. After standing there for six hours, and the fact that Motley Crue's bassist Nikki Sixx is my most favorite musician, she had sadly underestimated me. I will never understand people that do not get concert etiquette. If someone has been standing there for hours and you have just walked in, you should stand behind them.

Then there was the fiasco at the House of Blues last week. Drunk people, bar room brawls and an irritable guitarist. That about sums up that night.

Last night the bad karma continued. I went to see Britney Spears with the hubs. Gabriel loves her, meaning he thinks she is so pretty, and I have always had a soft spot for her. The night started out good, until two drunken girls decided to park it next to us. Long story short, they first irritated Gabe by wedging in a one foot space in front of us at which point all we could see was their hair. Then one of them fell down twice, the second time falling into my shoulder, at which point the only thing that kept me upright was Gabe's shirt, which is very stretched out on the arm now! Once she got off the ground she decided it would be a great idea to start a fight with the girl in front of us. I marched my happy little butt along with the girl drunken chick was trying to fight, over to the security. We told them what was going on and they were promptly escorted away. I did not pay more money than I would care to think about, to be at that concert and be pancaked! Good riddance!

Britney had a good show. She sang two songs live, which is rare in case you have never been to see her before. I must say she sounded really good! I can't help but feel sorry for her when I see her, though. She may have millions and tons of fans, but it must be so sad to be in a bubble like it appears she is in. For some reason she still doesn't seem 100% yet health wise. I hope when her tour ends she can continue to heal from all of the issues she has had in the past few years. I can't help but think of Michael Jackson when I see Britney. Is it worth trading your childhood for fame and fortune? It doesn't really seem so, does it?

Two of my coworkers are suing each other. It is very different as usually coworkers that sit next to each other all day do not do such a thing, but we are a unique bunch!

How is it that on Myspace I could get an invite to join a church group and to try out for Hustler magazine in a matter of five minutes? I have no party pictures on there. Heck, I don't even "party"! Why would these folks think I am a hoochie who needs to find religion? Mental note, must rethink my look!

I have to go get my car serviced tomorrow and I am very frightened to go. It seems like every time I go lately for something I think is minor the total bill comes to at least $600. Fingers crossed it is much less tomorrow! How I wished that I lived somewhere that I could take public transportation or taxis!

I made a coupon book after seeing this lady at the grocery store with one. She had the most awesome coupon book made from a photo album and picture inserts. I copied her and now have mine in a similar contraption, but I feel like a fool taking my photo album coupon book into the store. Will I look like I had too much time on my hands or like a coupon freak, albeit with a very cute polka dot photo album? I think I shall just leave it in the car and grab out what I need ahead of time. In my defense though, I did save over $100 last month with coupons so they do pay off.

Well what have you guys been up to so far this week? Details, details! :)
Posted by Joy De Vivre Design at 8:29 PM

Wow, what a week! I agree with you about Britney. I'm just about old enough to be her mother and see her as such a sad girl, even with all her success.

Hope your weekend is better!

Oy vey, not another fiasco! And I agree: it must feel lonely sometimes. I guess that's why she sang "Lucky" years ago.

Good luck with the car! I remember my car just kept dying on me and I was terrified I'd need a new battery, alternator, what have you. Turns out the battery just needed a new screw so it could connect properly. Cost only a couple bucks. Phew!

Don't be embarrassed about coupons--I used to take a shoebox full of coupons and place in the child seat. The coupons were organized by old envelopes with the name/category on the envelope. Saving money is fun!!

Kay-It is sad. Just a classic example of the fact that money is not everything. Thanks for the weekend wishes! You have a great weekend as well!

Dorkys-I agree that "Lucky" seems to be more real than we thought back then.

Wow you got lucky only having to pay a couple of bucks for your car! We had to pay $275 today, but the dealership had told us it would be $600. Thankfully we went somewhere else. It is still more than I wanted to pay, but it could have been worse!

paintingpam-You are right, it is fun to save money. I think it is so strange now that the economy is bad it is "trendy" to be frugal. Heck if you were not raised with money it is a necessity! LOL! Once Hollywood starts wearing fashions from Target then it is trendy to be economical!